Designed and handmade in the UK.

If you would like another message on the front please let me know via email when you purchase the card and I will be happy to change.

Let customers speak for us

really pleased with my card exactly what I was looking for Thankyou.

I bought this print to go with a previous print my daughters bought for me a couple of years ago. I love the use of colours, different from the usual prints on the market. It arrived quickly and was well packaged. Also liked that it was signed. Nice touch.

I now have 3 dog heads pics in my kitchen. Very pleased with them - amazing !

We've had 8 Greyhounds over the years including the 2 we have now. My wife's eyes still well-up when she speaks of our first one, Porcia, who she calls her all-time heart dog. The connection between them was remarkable because it was obviously a two-way street. The dog essentially just tolerated me but loved her as profoundly as she loved the dog. We have precious few photos of Porcia. My wife's favorite of them is a very small digital black & white of Porcia's face cradled in my wife's hands while she is seated behind her.

I approached Mike several months ago with the idea of him painting a Christmas present for her based on that tiny photo, but figured it may be asking too much of him given the size of the photo and the fact that it was in b&w. After Asking for a few more photos of Porcia for more perspective on her physique, eyes and color, Mike said he would do it. I turned him loose to do what he wanted with no additional input from me, knowing that possibility existed that my wife would either love or hate it if he missed the mark in any way.

Long story short, Mike perfectly captured every aspect of Porcia from the detail of her eyes to her very essence, in his unique style except for the fact that it's a rare monochrome portrait. It's the day after Christmas and the tears are still flowing.

Thank you, Mike! In 24 years of marriage, this is undoubtedly the best Christmas gift I have ever given my better half. 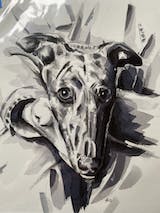